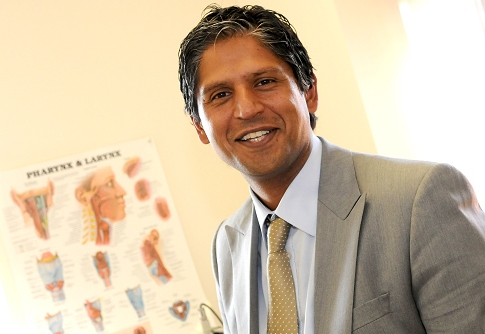 Mr Bhalla is a Consultant Rhinologist and Endoscopic Skull Base Surgeon at Manchester Royal Infirmary and Salford Royal Hospital. His private practices are at the Alexandra Hospital in Cheadle, at 52 Alderley Road, The Wilmslow Hospital and at Spire Manchester in Didsbury.

Mr Bhalla trained in the North West and, prior to his appointment as a Consultant in 2007, spent 12 months at the Alberta Sinus Centre, University of Alberta Hospital, Canada training in advanced endoscopic and minimally-invasive approaches to the sinuses and anterior skull base.

Since commencing his post, Mr Bhalla has established a comprehensive sinus and rhinoplasty service at both NHS hospitals and in his private practice, utilising the most current instruments, technology and surgical techniques.

At Manchester Royal Infirmary and Salford Royal Hospital, Mr Bhalla treats complex sinus and nasal disease and, abnormalities of the anterior skull base, such as CSF leak and tumours. He also performs a large amount of nasal surgery to correct breathing difficulties and deformities (rhinoplasty over 100 cases per year NHS and private). He also provides specialist surgery at the Royal Manchester Children's Hospital (RMCH) and Manchester Royal Eye Hospital (MREH). The large part of Mr Bhalla's surgery is performed as a day-case. Almost exclusively now across the hospitals at which he works (2 NHS and 3 private), the 3 elements of Mr Bhalla's practice are sinus surgery (40% of his time), rhinoplasty (40% of his time) and skull base surgery (20% of his time). He is, therefore, a Specialist Rhinologist (an ENT surgeon that specialises in problems related to the nose and sinuses).

Mr Bhalla also provides a very specialist regional service with his paediatric neurosurgical colleague to treat Congenital Midline Dermoid Cysts at RMCH, and also complex nasal, sinus and skull base problems in children. He organises and chairs a regional Rhinology multi-disciplinary team (MDT) meeting at Manchester Royal Infirmary, and is involved in a Skull Base MDT at Salford Royal Hospital and an Orbital MDT at MREH.  These meetings are designed to collaborate to improve decision making and ultimately, to raise the bar in terms of patient care.

At Salford Royal Hospital, Mr Bhalla is a member of the Manchester Skull Base Unit. Here, he performs complex endoscopic skull base surgery with his neurosurgical partners. He also holds an Honorary Senior Lecturer's position with the University of Manchester.

Mr Bhalla has research interests in the association between sinus disease and asthma, tumours of the sinuses, and new technologies and their application in sinus surgery. He hosts his own cadaveric sinus dissection courses (www.nose-manchester.co.uk and www.sinus.uk.com) at the University of Manchester and is invited expert faculty at both national and international sinus, advanced sinus and ENT expert courses (Dundee, Winchester, Copenhagen, Trier, Cambridge, Newcastle, Berlin, Wrightington, London, Maribor, Southampton, Liverpool) and meetings. He is Clinical Director of the Manchester Surgical Skills and Simulation Centre and was recently on the Executive Council of the British Rhinological Society, now a Council member. He has recently been voted as the next President of the British Rhinological Society. He has been Chair for Courses and Simulation with ENT UK. He is also on the Councils of the Royal Society of Medicine (Rhinology Section) and British Society of Facial Plastics Surgery. He is a full member of the European Academy of Facial Plastic Surgery who have recognised both his commitment to and volume of rhinoplasty surgery. He also remains involved closely with the British Skull Base Society, and co-organised BACO 2018 in Manchester. He was responsible for the cadaveric dissection programme for ENT UK at this international meeting.

Mr Bhalla was recently invited to Copenhagen, Denmark (September 2015) where he performed two endoscopic skull base surgical procedures. One of these was a historic event in Denmark - the first trans-nasal endoscopic skull base resection performed in Denmark. This was a very proud day in his career.  He is shortly due to mentor 2 Swedish Rhinologists whilst they perform advanced frontal sinus surgery, later this year.

"What's new in sinus and skull base surgery?"

"Trans-nasal resection of skull base malignancies: principles and evidence"